Become an assassin in crayta harbour, you have unfinished business here and its time to finish it. Take on AI targets, be chased by agents, assassinate other players. Play it safe and stealth or cause utter carnage, you get to decide.

After a short introduction. We are dropped into a harbor full of life. Most players will have difficulties starting, there are no indications except this UI prompt at the top of the screen. 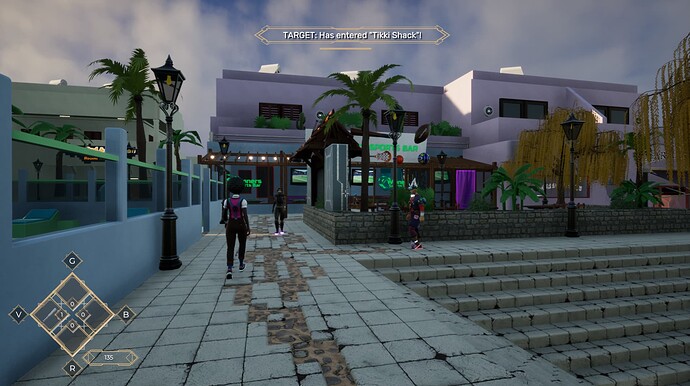 ㅤ
Despite this point, once you get used to what the game is all about, you will start your journey as an assassin. Let’s equip the bat and look after our target.

The base movement of the character is a bit slow but the sprint is really important. Indeed, after having found your target and obviously after a vicious murder, you will have to run away from that place before the agents get to you.

You will have to find a hidden place to wait for agents to forget about you and start again your work. 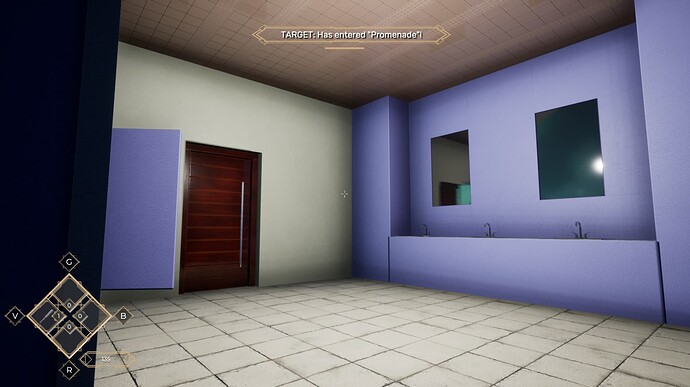 ㅤ
ㅤ
Each contract done will reward you with money. If you are good enough to accomplish many contracts in a row, you will obtain a % bonus.
But it won’t be that easy, agents are very good with their weapons, and as soon as they will see you, they will shoot at you.

Be careful during your game, killing an innocent or being killed will punish you by losing tons of money. 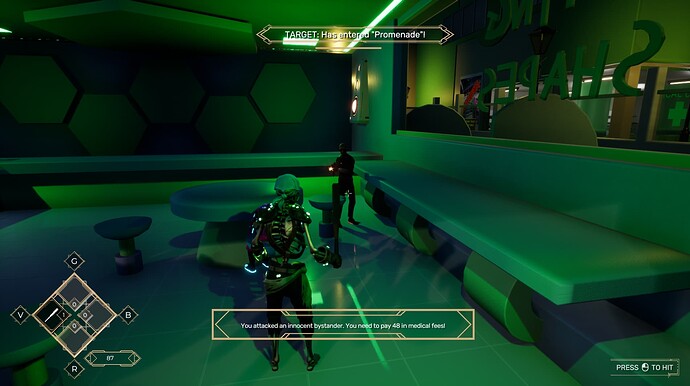 ㅤ
ㅤ
But the real game starts when you are multiple players inside the game. Indeed, as you don’t have any clue who is a player, you will be able to act as an NPC to slay other players. Run away, change your outfit and start over!

After having earned a lot of money, you can sit on a chair, be able to open your inventory, and the shop to buy some stuff to help you. From some gadgets to better weapons, all the available items give you a different way to take down your enemy. 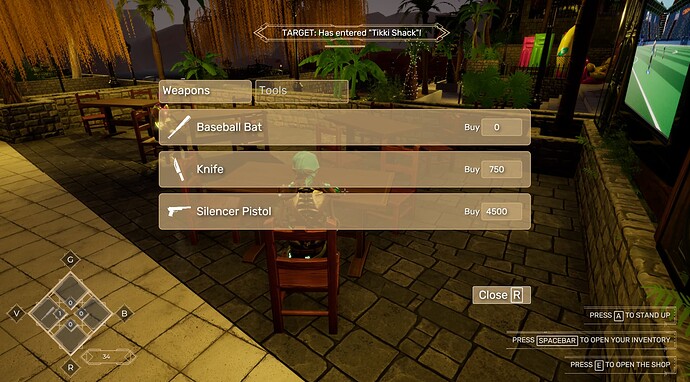 ㅤ
The “fun” term is a generic word to qualify a game about enjoyment, adrenaline, and addiction of it.

When you start the game for the first time, it can be frustrating to wait for the intro to end. Yes, some people just wanna play and rather skip introductions. The minute of introduction has a high risk to make the player leave the game.

Despite that, once you get how the game works and start to know how to do it well, the fun is increasing. Walking behind your target, waiting for the right moment and place to end its life is enjoyable! But the repetition of the game can highly decrease the fun, indeed, you will be a long moment with the bat, which is always the same way to kill a target.

Plus the agents have the real power to kill you and seeing all your efforts getting wrecked that easily by the AI can increase frustration and ragequit.

However, the fun is exploding if you play with a few friends and other players. Walking like an NPC, reaching at your friend without him knowing that you are just right in front of him, equipping your weapon to kill him. That satisfaction when you see his body falling to the ground is SO enjoyable, I had a lot of fun killing “Hisokan” and I’m sure he didn’t even know I was in the game.

So if you play the game alone against NPC, it can become frustrating and repetitive, at the moment, you only have weapons to kill them, later it can be a ton of fun if the creators add other ways to kill, pushing the NPC in water, in a hole. (i.e. Hitman)

But the game needs to be played multiplayer, this is how the game is meant to be played, my personal thoughts. 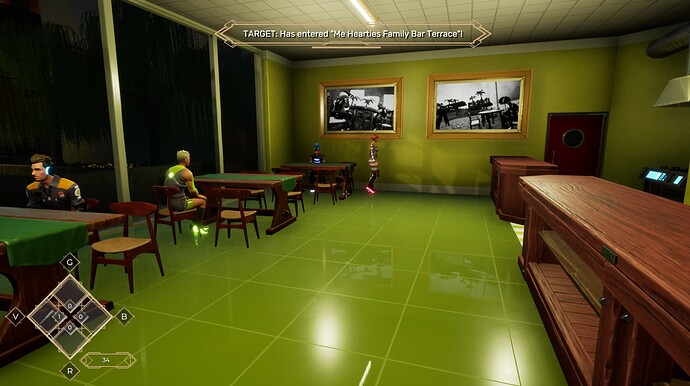 ㅤ
The game is well-made. The AI is incredible and just seems to live its life, its behavior adds a lot of depth to the game. Making a map like that is a challenge because it needs to be aesthetic but also performant. Voxel meshes are very demanding.

However, the art is quite good and the performance is also good. Despite a high amount of NPCs, the game is smooth.

Concerning the game itself, it can be a bit too slow when played alone, repetitive as you only have to kill a target with a weapon and run away. It would be nice to have ways to kill targets, and a way to defend ourselves against those crazy agents that are just Terminators.

The punishment of death is also frustrating. When you are at the edge of buying a gun and suddenly getting killed and losing 3000 of money, you just wanna press the quit button.

But the slowness of the game becomes a strength when playing against other players. Killing a player, running away, and changing my outfit was the best part of my experience. But I would also have a lot more features in the future.

The game sadly doesn’t offer enough ways to keep the player playing over and over again. If played with friends, you can last hours into it but alone, a player will leave after a few contracts or deaths.

For the future, think of new ways to add retention and be less repetitive.

ㅤ
This grade is my personnal overall feeling for the game, it’s not supposed to create any problems
ㅤ
ㅤ
GAMEPLAY - 3.5 / 5
The gameplay of Contract Assassins is fast to learn, but like a lot of games in Crayta, it lacks a tutorial or guide at the beginning. Indeed you are dropped fast in the world without knowing what you have to do.

Alone, the gameplay will be repetitive, slow and sometimes a bit flat. Playing alone is very good if you look for loneliness and an easy task to repeat.

If you play multiplayer, the slowness of the game is what makes the gameplay amazing. But I would have more things to do than just walking, killing and eventually buying stuff (very hard).

ㅤ
ㅤ
REPLAYABILITY - 4 / 5
Once you know the mechanics of the game, you can replay it infinitely, as you have endless contracts to accomplish. The fact that each target looks different and is in a different place creates a feeling of randomness.

Having this secondary goal (buying stuff such as weapons and gadgets) also makes you replay a game, it can be addictive, especially with other players.

RETENTION - 1.5 / 5
The game has a lot of possibilities to make players replay it. However, I feel like most players will give a one-go session from time to time. There isn’t real retention mechanics that keep you coming back to play.

The shop stuff is supposed to add some retention but the fact is that the game is entirely doable and playable with the first weapon, which is a good point but not for retention.

In a game like that, and especially for a UGC platform, it needs to have features like housing and cosmetics. The game offers leaderboards, but they should be more rewarded and displayed with UI or in the world.

ㅤ
ㅤ
AESTHETIC - 3/ 5
The game building is nice but it could have been worked a bit much, some details are missing. I also think that back streets should have been designed too, not only being an empty area.

The UI is a bit poor, even tho the game is meant to be like that, it could have the benefit of a more “modern” looking UI. The color of the UI makes it hard to watch and see. It blends with the environment.

The overall map is well-design, I recognize a harbor full of shops, there are lots of different ways and it’s easy to remember after some games.

But add more UI, why not add for example a phone that you can display and see a list of targets, then you pick a contract and the UI is appearing at the top of the screen?

ㅤ
As retention is mostly what U2G is seeking for this jam. I think you will miss the top 5.

But aside from retention, the AI and art are nice. You could hit the Sharing the World award even though I think it’s not enough pointed to that shared experience. You also have chance to win the Best Retention Mechanics in an Action or Adventure game but only if there is not any other adventure or action game.

If yo udon’t win one of these award, you will probably win a Honorable Mention or the Judge Choice Special Award.

I think you have a high chance to win the Simple Clicks" award. Indeed your game is quite simple to play as 100% of the game is playable with the mouse.

If you don’t win the Simple Click award, then you will win an honorable mention or the Judges Choice Special Award.

ㅤ
I loved the game and the mechnaics. The art is really nice and I had a lot of fun playing it especially with other players. Please, don’t take anything I said above the wrong way. I made the test and this judgement with a neutral position. This is entirely my feeling and it can be totally wrong.