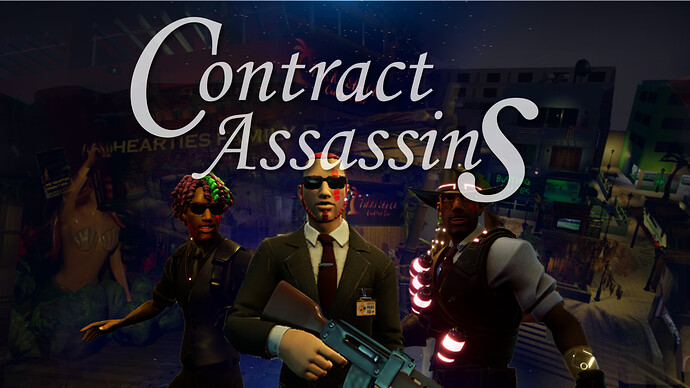 Arriving in Crayta Harbour, you are tasked with completing unfinished business from the previous year’s festival. You will be given contracts to complete and its up to you how you eliminate the targets, Are you a stealth player, watching and waiting? or will you run through the harbour like a machine eliminating anything and everything that stand in your way?

As you begin you will receive contracts from your handler, these contracts appear at the top of your screen along with a scanner bar that beats quicker as you close in on your target. The only information you will be provided is the current location the target entered or exited, it is up to you to decide who your target is… some places can be very busy!

Rewards from target vary in multiple disciplines based on a random bonus to streak multiplier. Streak multipliers are based on how long you have lasted without being caught by the agents also killing an innocent bystander will set your streak back to 0

Agents are on the prowl and will not tolerate assassins on the harbour, you best avoid them at all cost, they are extremely deadly and will take a % of your currency if your found to be doing wrong!

Civilians will be casually walking around the harbour, accidently hit one of these and your paying for medical bills, best be careful with them stray knifes or bullets

Players will also be present, kill one and take some of their money, be killed and they will take some of yours

The shop has many items to buy from Silencers to Landmines, choose you slots wisely and play how you want to play, are you a stealth master or are you out to cause mayhem!

Try changing you player skins if you are spotted by other players, hide in plain sight by sitting in the café or simply run… run like you have never run before

Familiarise yourself with the harbour layout and shop/bar names… This will help when completing contracts quicker and more effective.

Sitting is a good way of removing any unwanted attention, watch the tourists, see how they move around the harbour. Your assassin does have a slight walk speed advantage so be wary when speed walking as this may grab the attention of another player

Tourists are always walking around, and some may stop for a coffee or a boogie in the Me Hearties Family Bar. They present no danger other than taking some money from you if you accidently catch one with a stray knife or bullet. They are represented in the crayta skins from past and present battle passes and seasons including some default characters allowing any new players with limited skins still enjoy the game to its full potential.

Tourists have routines and will set themselves a task, these range from finding a seat to standing on the docks listening to the waves, these are random, and no tourist ever repeats the same order of routine

we decided to not tell you when other players were in the game, and best left for you to find them yourself, you will be rewarded for taking them down but remember… another play may have just seen you chase them and may now be hunting you. We have added a small probability that your target is another player or you could be theirs

One of my fav games so far. Really fun, I can’t wait for updates