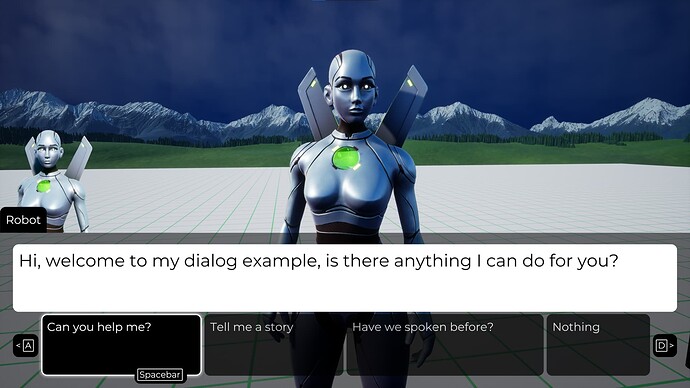 The Dialog System allows you to add dialog trees to your game with easily customisable UI.

The Dialog System is an ideal solution for:


The dialog UI can be customised on the UserDialog template, where there’s many options for the colours, layout, sizes and more of the dialog UI.

FULL set up guide
The dialog can be attached to an NPC, or it can exist in the world by itself. Either way, a DialogControl entity is required (there’s a template for this, or it comes with the DialogNPC template).

Any dialog system is based on a DialogControl entity

A dialog tree is made up of messages and responses.

The logic of the dialog can be controlled by decisions.

DialogDecision
A dialog decision can take the place of a dialog message. It can check a query in the world, and then either go to a “positive message” or “negative message” based on whether the query criteria are met. A decision includes:

UserSaveInteraction
The UserDialog script folder contains a “user save interaction script”. This works with the “Msg_Goodbye” and the “Decision_HasInteracted” in the DialogNPC_Example to save whether you’ve spoken to this NPC before. This is a handy script that can store which NPCs you’ve spoken to, for a story-driven game where you want to have many characters that “remember” your interactions. You can also look at how the logic is set up, to make similar logic for, e.g., check if the user has a certain item in their inventory before showing them a particular message.

Love it! This is a great package to have.

Why you didn’t called “Simple” Dialog System? Now I won’t find it! XD Jk, this is great, love it <3

Hi Adam! I’ve been playing with this and find a small issue. When I interacted with a second NPC the dialog from the first NPC in my map opened. It was because the event on the interact trigger wasn’t set to call the dialogControlScript on the specific NPC. Once I dragged the DialogControl into the OnInteract event it worked perfectly. 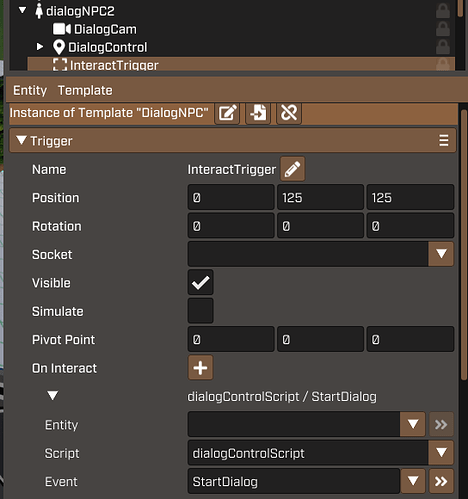 Oops! Thanks for pointing out. Fixed and updated the package

@tumbak7 because I spent like a whole day writing this package guide, it doesn’t feel very “simple”

@Adam Hey adam, could we get an event that fires when a response is selected?

Right now, you can kind of do this by setting up another message that has a messageEvent, but that message still requires text, and you need to manually dismiss it immediately in the event. It would be a lot more convenient to have a response just delegate control off to something else and exit the dialog completely

Hey, Adam, I came here to request events on responses and found Cereal already asked, so here’s my upvote.

@Cereal @Mad-Eye added a response event to the dialog responses, works the same as the message event. Sorry I took so long getting around to it

Thank you for adding it! It would have been really helpful during the Jam