Allows for moving between worlds, with custom spawn points.

In the destination world, create 2 Locators:

When the player enters the trigger, they will be sent to the destination world and will spawn at the Locator whose name matches the value of SPAWNCODE set in the teleporter trigger.

I’m having trouble getting this to work – I keep running into this error and I’m not exactly sure how to go about fixing it.

Hmm. I can replicate the issue here, so I’ll check it out and get back to you. Thanks for the report!

Actually, found the source of the issue and made an update. Changes should be in the community package as we speak.

Thanks for quickly looking into this and working on an update! Unfortunately I’m still running into that same issue. I tried in my game as well as a clean game. I tried both updating the package, and uninstalling and re-installing to test but still no luck.

As I side note, I really appreciate your script notation and the inclusion of a README with instructions! It’s something not a lot of the community scripts include at the moment and it helps understand how it’s all working.

Still the same error on line 41 of TeleportTrigger? I had to rename the reference on line 38 last night because it was pointing to the incorrect (i.e. old) name of the script. With the incorrect name, line 41 would blow up because it didn’t know where to find the old, incorrect script.

Now, line 38 of TeleportTrigger should read:

Also, line 43 was changed to “WriteUserData”

TeleportTriggerData itself needed a complete internal rename of all of the “function [ThisGotChanged]:EventNames” within the script, as well as the very first and very last statements.

Could you verify that you see these changes in the scripts you’ve got currently? I’m not 100% confident in the package system 100% of the time, and I would just like to rule that out since it’s easy to do.

Aha! The scripts are not showing those changes despite the update appearing!

Hmmmmm. This makes me sad

I put the updated scripts into a NEW package called “World Teleport with Multitarget”. If you delete the old pack and scripts and download this one, hopefully it’ll provide the refreshed files for you.

So a strange thing is happening when I try to delete the package. I delete the original Inter-World Door Teleporter package, but when I install the World Teleport With Multitarget, it seems to install Inter-World Door Teleporter at the same time, and then when I hover over the scripts in my library, it shows they are part of the Inter-World package and appear to still be the old scripts without edits. My only guess it that it’s occurring because the scripts share the same name. Oddly enough, the Readme text is updated, but the scripts are not.

I submitted a bug report here if you want to follow it:

As an additional note, I just went into the community tab and tried downloading a script which caused the delete prompts to appear and the package was successfully deleted, but only when trying to download a new one.

I’m really sorry about this. If you’re interested, here’s the code for the two scripts, sans comments. It’s about as good as a copy and paste as we can get due to the whole Stadia thing 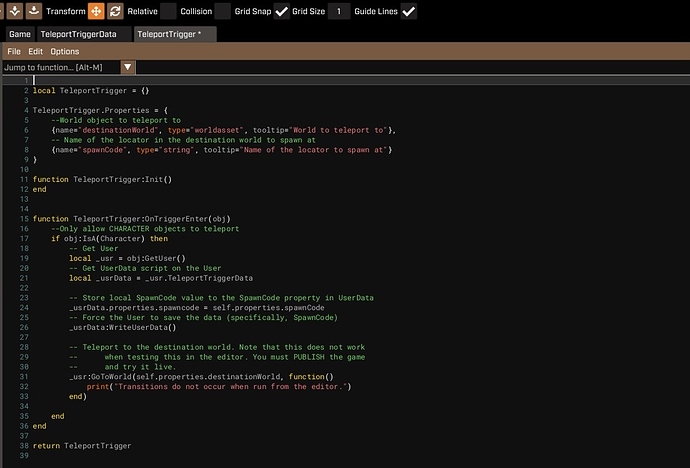 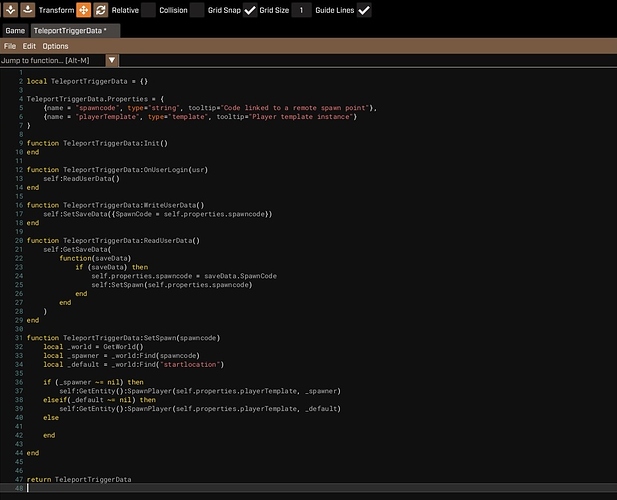 No worries at all! It’s not your fault, just some bugs in the new game. Hopefully they get them worked out soon!

Loving the idea for the inter world transported, but I’ve got a problem.

When ever I enter the trigger, it doesn’t transport me.

I am using f5 to test my trigger, I’d rather not publish the game yet.

Any tips would be very welcomed.

Hi Phil. Unfortunately the Crayta system itself disallows interworld transport in the editor. Something about the editor running on a totally different server from the games servers or something. The only way to really test it is to publish, although once you are done you can set the world to ARCHIVE, and then RESTORE it to “unpublish” the world.

Ah,that’s unfortunate. I gather with that error then it would suggest that it’s working, but needs publishing first. That’ll do for now then when I’m ready for a final test I’ll think about the publish and archive solution.

Thanks for the prompt reply, at least I know I don’t need to spend hours trying to fix something that is fundamentally unfixable.

Yep, as long as it’s printing it to console it should be working as intended.

Just a note in case you missed it, you can now copy and paste in and out of Stadia

Hey!
About: 4. Add the TELEPORTTRIGGERDATA to the USER template. Supply the PLAYER template in the PLAYERTEMPLATE property dropdown

What if I want to have a different playercharacter spawned in one of the worlds. If I change the player to another player on this script, it changes it for each world.
How could I do this?