Kingdom Fights is a real time strategy game of Tower Rush genre, every decision you make will affect the final outcome.
Do you want to be number one? Don’t waste time and defend your towers against the enemy invasion, your units will obey your orders on the battlefield and finish off all your opponents.

After a nice menu splash screen, you are dropped into a cute tavern. This place is full of life and is mostly used as a welcome place and hub for the game. 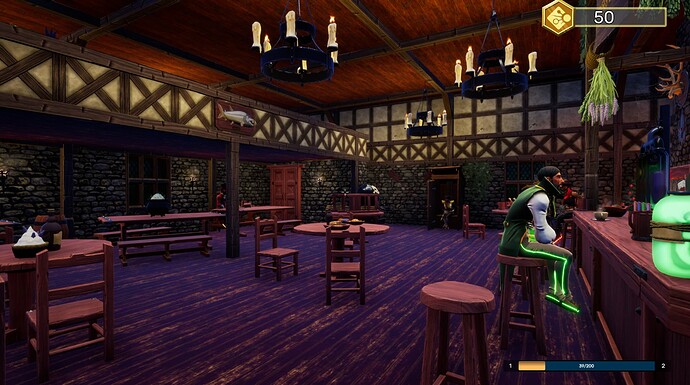 ㅤ
But the game starts when you reach one of the arcade machines that incites you to PLAY! Let’s start a round. 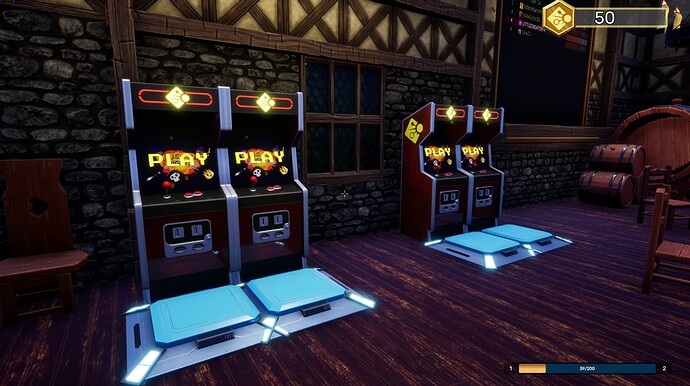 ㅤ
ㅤ
You suddenly have a rich menu in front of you, offering you a lot of different choices. As I’m curious, I will check every of those, here is what each option does : 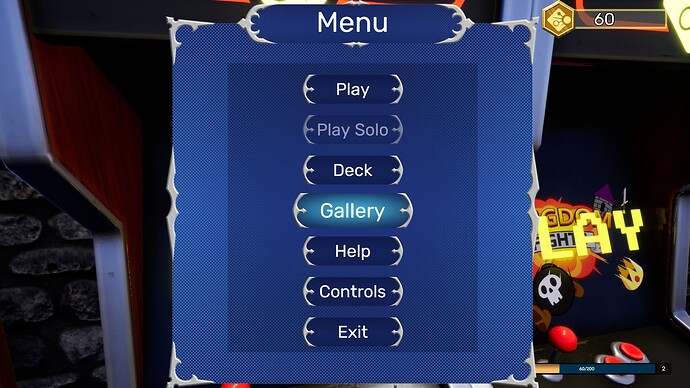 ㅤ
ㅤ
After having checked everything on the help and control pages, it is essential to get how to play the game. You will want to create your deck, but you will have to play some games to earn coins.

You will be able to spend coins to buy new cards and then add new cards to your deck, but be careful, you will have to get rid of a card for each card you will add. 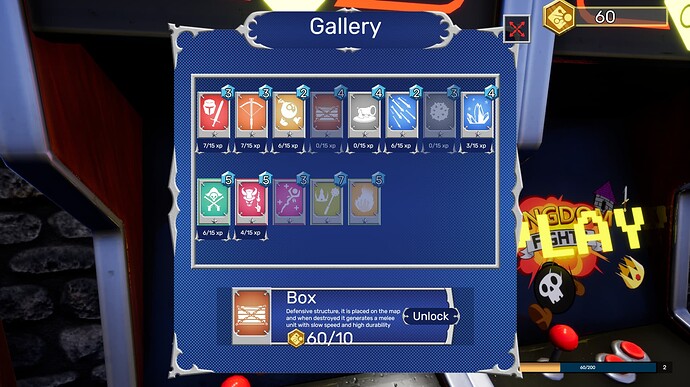 ㅤ
ㅤ
Let’s now hop into a game. Make sure that there is at least one other player with you, else you will have to wait until a player joins the game to play.

After joining a game, be ready to play, no time to hang out. Indeed, your opponent and you will have an “action bar” that will increase point after point (the left bottom of the screen bar). 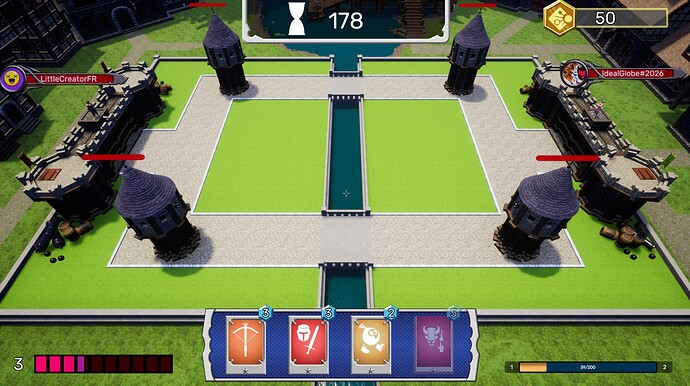 ㅤ
ㅤ
Each card has a required amount of “action points” that the bar must be at to be placed in the game. Anyway, when a card is not playable, it will look transparent. 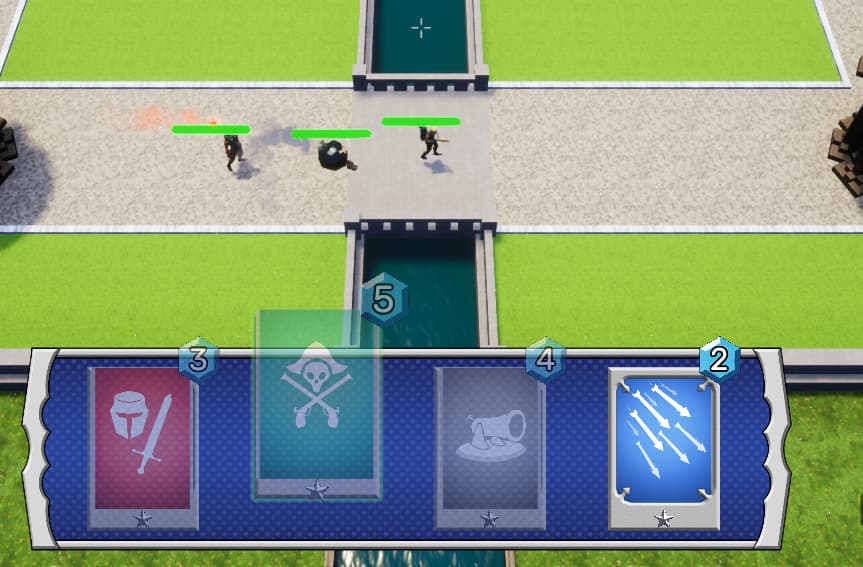 ㅤ
ㅤ
The game offers multiple different cards, from units to abilities, you will have a lot of ways to take down your opponent’s towers and castle.

Winning a game gives you coins. But don’t worry if you lose, each time you use a unit or ability, it gains experience which means you will be able to upgrade them when you’ll have enough coins.

But winning certainly makes it faster. And is also enjoyable as a cool camera spot will be shown to both players! The game can also finished being a tie. 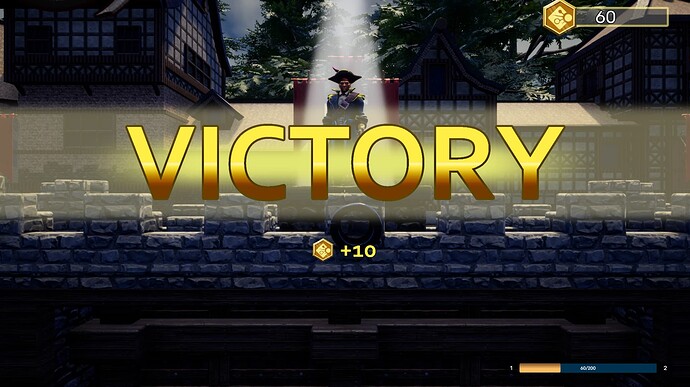 ㅤ
The “fun” term is a generic word to qualify a game about enjoyment, adrenaline, and addiction of it.

This type of game is really enjoyable. It doesn’t have to make its proof anymore. The fun can vary depending on who you are playing and also if you win. This is typically the type of game that a lot of competitive players play and is in the end also the most “ragequited” kind of game!

At your beginnings, you will struggle to learn cards, how to use them well, and create good tactics. The beginning can hit the fun as you will randomly spawn units and abilities.

But the strength of this game comes after a certain while playing it, once players will start to know the cards and have tactics.

But be sure that the fun is already there even in the first fight, you can feel the adrenaline and stress as you see your opponent keep spawning units to break your tower.

But the fun is broken at the moment when others are playing and you don’t have an opponent and have to wait to play. I see there will be a “Solo” system that will resolve this problem, but the AI will have to be very smart. 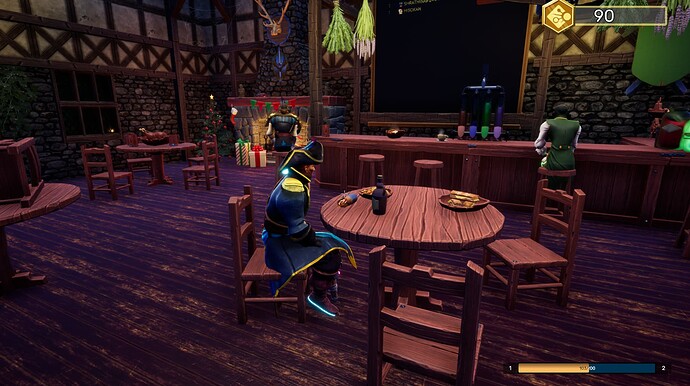 ㅤ
The game is well-made. I had no problems running a game, dragging my units to the fight zone, and winning… eventually.

However, I’d like to have more to do while waiting in the hub (tavern) or opening the toilet door of this poor dude. For example, I’d love to have a zone in the tavern where I can watch the fight occurring or maybe have the possibility to override my camera to the current fight.

Then I could see how others play and learn some tips & tricks.

The third-person camera is a bit annoying in the hub, it collides with everything. would set it to first person.

Concerning the game itself, I felt like it still needs some balancing and some work. Such as being able to spawn a unit on the opposite side once a tower has been broken.

Also, this type of game aims at a specific player community. The competitive ones. Most players of Crayta are logging in to play easy games without too much hardness. So the choice you made is risky but will be worth it for more mature players.

ㅤ
This grade is my personnal overall feeling for the game, it’s not supposed to create any problems
ㅤ
ㅤ
GAMEPLAY - 4 / 5

The game is easy to play. And quite easy to understand. It works smoothly, most of the time I played, some lags from time to time but nothing annoying.
The game would benefit of being a bit faster. Units and the overall game should be faster.
But the main stuff is what we are waiting of a game like that.

I’m waiting for the solo adventure to see how you will make it. It can help the game hook casual players.

After having learned how to play. The game will make you replay it. As the rounds are fast, even if you’re waiting, you will wait to play a new round.
Having all these cards to unlock and upgrade keeps the player active.

With a friend, you can mostly play for hours. And I guess with the solo being released, maybe even without friends in a near future.

However, the game is a high competition game which means the casual player would not invest time in it, so a big part of the community would eventually play it once but would not come back to it.
ㅤ
ㅤ

Retention is present in this game. Indeed, all these upgradable and unlockable cards are a great way to hook players. But at the moment, there are not a lot of cards and the game is completely playable without having to buy new cards or upgrades.
It would become necessary to buy new things if your game builds a community around it so players would increase their level.

The fact that we have to “wait” until a new game is available also can break that retention to the game. Adding a spectate cam could solve this issue if the solo mode is not ready yet.
ㅤ
ㅤ
AESTHETIC - 2 / 5

The hub will probably be the main area of your game as it is the first thing players will see when joining the game. The starting point is abrupt and narrow.

The main place is bigger but is overwhelmed by meshes. So as it is the first place the player meets, I would recommend making it fancier, you can keep your details but add more space to walk around. I felt like a drunk pirate knocking into each chair around.

For the fight area, I felt it was a bit empty and flat. I would love to see differently designed areas. But I would like to see more details too around the fight area.

The UI looks good and is smooth, I would maybe change the color scheme, but this is purely a personal thought. The blue and metallic grey is good I’d rather have a wood brown and gold ore.

Another point is, why using an arcade machine into a fantasy tavern. You could use something else to not break the consistency of the art style and theme.

I am waiting more for the aesthetic side, but the game still looks good.

ㅤ
As retention is mostly what U2G is seeking for this jam. I think you can take a place on the top 5.

But aside from retention, the gameplay is mostly playable with a mouse (for the fight side) which gives you a chance to win the Simple Clicks award. Also, you have a high chance of winning the Best Retention Mechanics in an Action or Adventure Game award.

The winning camera effect is interesting, I’d say, you could have the Magic Moments award if not any other games have it.

Last but not least, you could be the Judges Choice Special Award award if you don’t have any of those above.

ㅤ
I am not a big player of action cards game like this but your game is well-made, works smoothly and has a lot of potential for the future. The game is enjoyable when playing with other players but can be unplayable alone at the moment. Please, don’t take anything I said above the wrong way. I made the test and this judgement with a neutral position. This is entirely my feeling and it can be totally wrong.

PS : I didn’t talk about the mobile version as I didn’t test it. But it’s definitely a good point you added so it work well on it

Thank you for taking the time to play our game and write this feedback, we will take your comments into account and hope that in the future you will be able to enjoy options that we have not been able to add in this jam.