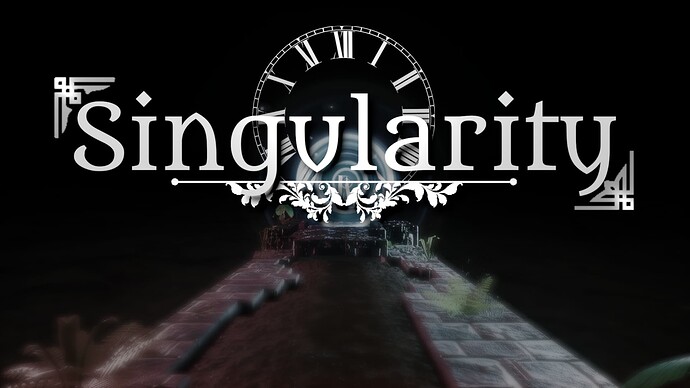 Note: Singularity has been extensively reworked in a recent update, please reffer to the comments below for updated information about the game!
Update-Related reply: https://forum.crayta.com/t/singularity/2884/4

Singularity is an action/exploration/challenge game where you must descend successive floors by exploring procedurally generated dungeons.

Each floor is purely random and its difficulty increases progressively as you descend. But that’s easier said than done; A Singularity is unleashed in these subterraneans and it will scourge you all!

In addition, due to the energy emitted from the singularity, an increasing number of electrical entities will try to stop your progress on each floor. Your best option is to use the objects you can find on these floors against these electrical entities.

But stay alert! Getting close to the Singularity can be fatal and there is nothing you can do to stop it!

To access the next floor you have to find a lever that unlocks the exit. Although it is recommended that in your exploration you also locate (Even if you haven’t found yet the lever) where the exit is because time is vital. 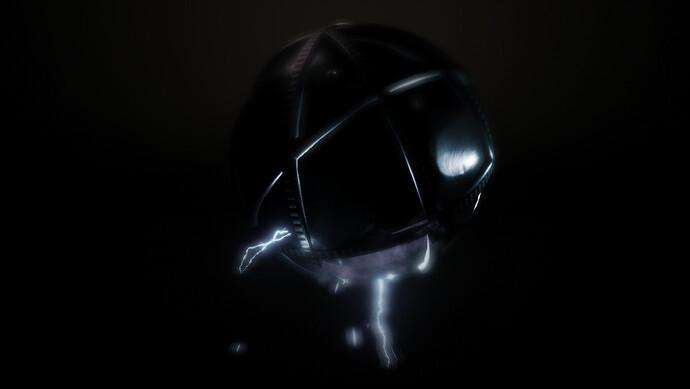 The Singularity will not hesitate to attack any player in the level. When a player is targeted a yellow vortex appears around him. However, the Singularity can change its target without warning and even remain inactive for a few seconds before searching for its next victim.

The first floor is always well lit and free of hazards. It is also the smallest of all. Acting in such a way as a passive tutorial.

After this, the dangers progressively appear and increase in number. In the same way the tendency is that each floor is slightly larger and labyrinthine than the previous one. 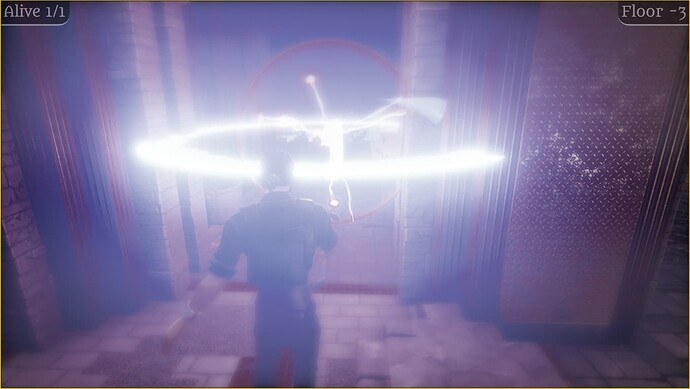 When close enough to the player the Electric Entities will emit a peculiar sound that means they are charging their attack. Alone they are not much of a threat but if they manage to surround a player they can be fatal which makes them a priority to destroy while exploring each level.

These entities can be destroyed with the hand weapons that you can find randomly scattered throughout the levels.

Each weapon has a unique specific damage and a unique range area and despite its randomness, each one has a different probability of occurrence depending on its uniqueness.

There are also floors that have a tendency to generate more and better quality weapons than others.

Likewise, the deeper you go the more traps may appear. These traps are easy to recognize as a strange looking cylinder occupies the floor.

One way to avoid them is to dodge the cylinder, jump to dodge them or walk inside them; they are only activated if the player runs over the detector cylinder.

In order to pass to the next level, all players who are still alive must meet at the exit. As soon as all remaining players enter the exit, they will automatically go down to the next floor.

If you are a coder, a game dev, designer or just curious this section is for you! Here I’ll attempt to explain the inner workings of this game.

The game itself is based on a package that I have been developing lately that is able to generate mazes in a fully configurable area. Unlike other packages of the same kind this one works with tiles instead of preset rooms.

This allows a high level of customization and randomization. 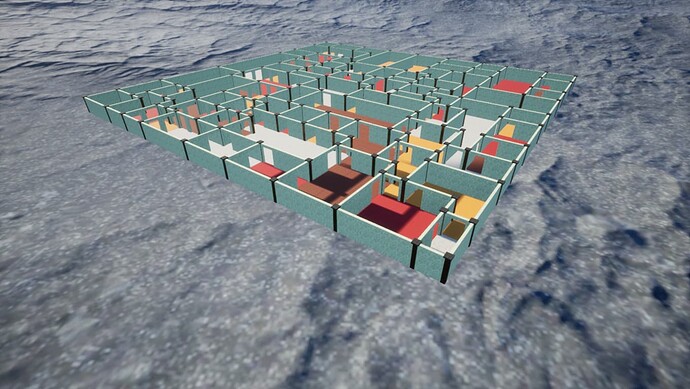 The package itself has nothing hard-coded for this game. In fact this package is oriented so that anyone adding templates can make their own dungeons totally to their liking.

This process is highly CPU and rendering intensive (That is why it features loading screens between levels). In addition, due to the size that the levels can reach, it generates many entities. Therefore, as soon as the game starts the Lobby (where the players meet at the beginning of the game) is completely eliminated and is only generated again if the game is over.

In the same way at the end of a level it is completely deleted and the next one is generated in the same place. In the meantime the players are transferred (and their inputs deactivated) to a room that is permanent throughout the game and far from the action zone. If you want to check this sequence I recorded this video where you can see a level being deleted on end and the next one being generated: YouTube: Singularity level sequence

It is actually a series of scripts that control the end of level conditions that command the level to be deleted and launch the level generator package script again with new parameters.

Originally this game was to be a simple showcase of the package so that people could see it in action and get ideas for their own projects. But after motivating us a little bit it ended up being a game itself.

This part may be a bit of a spoiler but the way the game determines which thematic biome to use is depending on the multiples of the number of each floor:

In future updates we will surely make more themed biomes with their own characteristics and environment.

I decided that it would be a good idea to make such a game because the randomization factor dramatically increases the replayability and challenge that players face.

In the same way, our aspirations for this game are to update and maintain it periodically in order to always offer a fresh and new experience to the players.

Including adding special events and even more variety of enemies, items and areas.

We sincerely hope you have as much fun playing it as we have had developing it.

After the great feedback you all gave me in the launch day I corrected some things:

Incoming stuff to be fixed / added

This game… is on my favorites list forever! We had the best time as a group discovering the levers in the many rooms and making it through to the end… Beautiful clean UI. The interior decoration is perfect eerie elegant. The lighting and post-processing is spot on! Spooky panic energy high!

Absolutely Love this Game. It is beautiful! 10/10 for streaming with friends!

After a relatively long time we have decided to implement some of the things we were looking forward to add to Singularity. We hope you are ready because there are a lot of changes!

A renewed interface, new enemies, weapons and mechanics are just some of the changes we have introduced in this update.

(Some of the) New Features 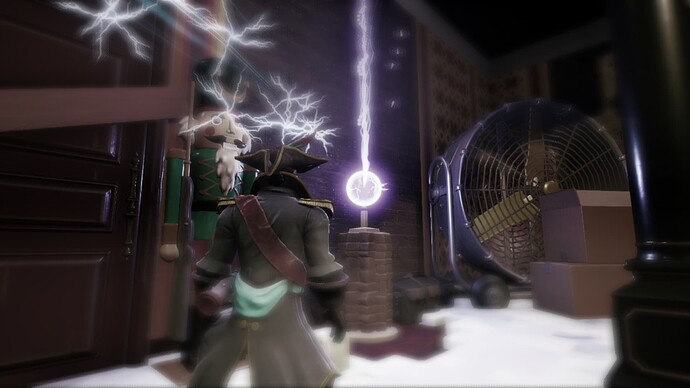 Dummy Magical Tower1920×1080 96.1 KB
The magic towers are static enemies that appear in the levels. The deeper the level the more towers will appear!

These towers will not hesitate to shoot projectiles at you when they see you. There are different types of magic and each type of magic causes more or less damage! It’s up to you to find out the hard way which one is which! 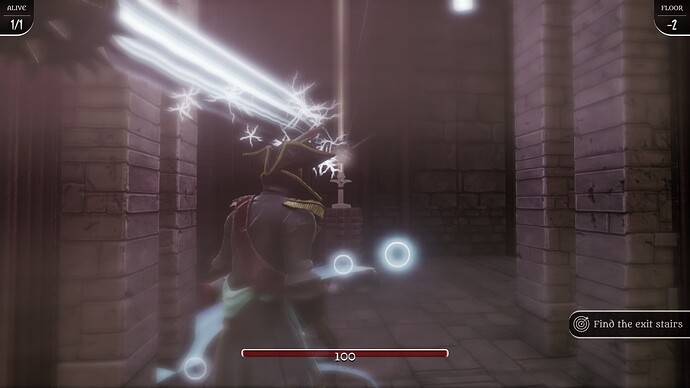 Ooops1920×1080 77.6 KB
The best way to finish them off is to dive on them or shoot projectiles at them with the new magical ranged weapons.

Here is a spoiler of the mechanics of the turrets. We recommend reading it at your own discretion and judgment:

You can avoid being hit by projectiles and even in some cases completely avoid being marked as a target by crouching.

Now you can interact with the Singularity itself in order to complete the levels!

If you shoot the Singularity with a magic weapon and hit it with the projectile, it will emit a series of sounds and stay still for 5 seconds. It will also emit a huge orange glow that will fade as the time it is still runs out. 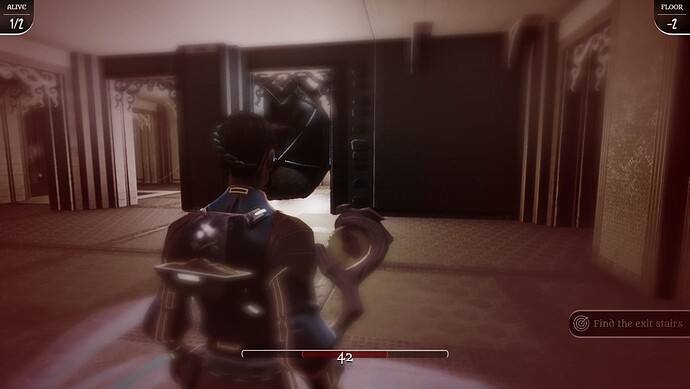 This can be repeated as many times as necessary, but be careful! If you have no ranged magic weapons you will not be able to do this! 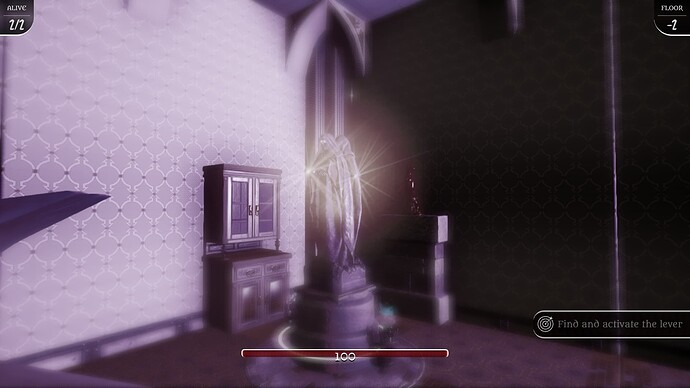 In addition, there is now also a high probability that the shrine statue will appear in the level.

This statue can only be activated once per level, it is easy to find as it emits a bright blue light until it is activated.

Use this wisely because can save you from the Singularity if used properly. 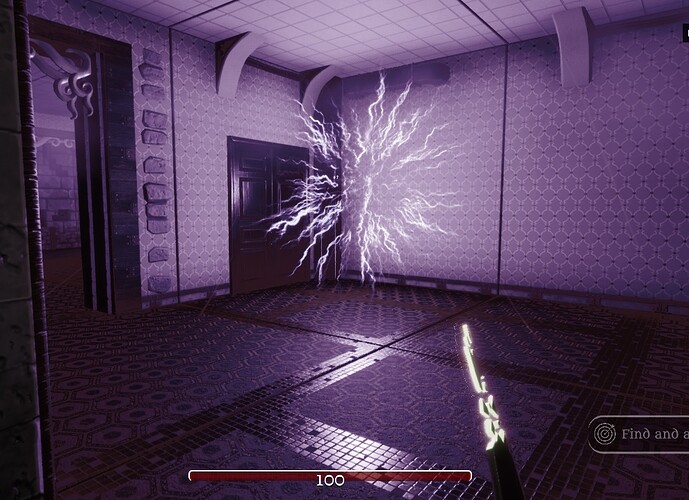 Since some people did not like the post-processing used by default in the game it is now optional to use it; by default it is enabled.
But by pressing the [G] key on computers (See the Crayta control sheet for other controllers and/or platforms) you can enable/disable it at any time according to your taste!

You can get them by finding them randomly in the levels and there is one hidden in the lobby! 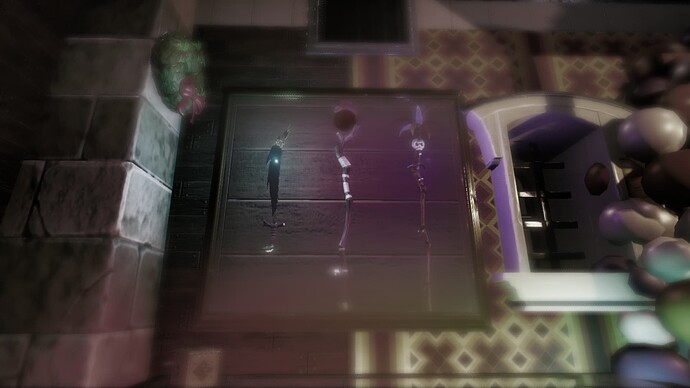 Note: The weapons in the Lobby are ordered from lowest damage (reddish) to greatest damage (bluish)

In addition to all these improvements there are some more minor improvements that we hope will surprise you! We want to emphasize that it is a lot of fun for us to improve and play with you our creations and that we have many more improvements we want to make in the near future to Singularity.

We hope you have as much fun playing it as we did making the game! 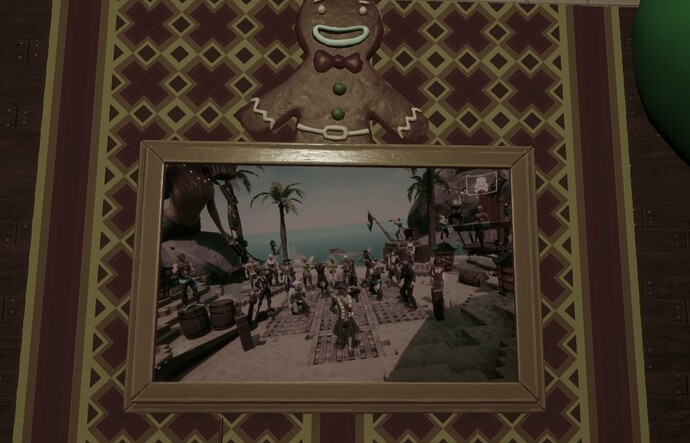